skip to main | skip to sidebar

The exhibition ended today, thanks to all who came by.

tastes+RED inc. would also like to say thanks to the following people;

Eriko (La Libreria), Audrey, Arnewaty, Flint, Annalicia, Wan & Yudy, Sari, and all you other kind folks who have guided and/or supported us along the way.

Last but not least.

It's been great working with all five of you. Thanks for all the support, trust and help. I wish you all the best for your future endeavours and I would love to work with all of you again.

"Freedom with responsibility and no conditioned liberty..."
(quote taken from guestbook)
Posted by WDNNE at 6:18 AM 5 comments:

- Michel Foucault
Posted by WDNNE at 6:44 PM No comments: 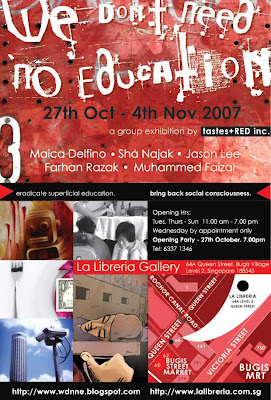 Separation of Art and State

Boaz calls for separation of art and state
by Raymond Carlson

David Boaz, executive vice president of the libertarian Cato Institute, discusses the relationship between art and government at the Yale Political Union on Wednesday evening.

In a flurry of gavel banging, hissing and desk tapping, the Yale Political Union met Tuesday evening for a debate on the ties between art and government.

The debate began with a speech in favor of the separation of art and state by David Boaz, executive vice president of the Cato Institute, a leading libertarian think tank. Over 120 members of the YPU filed into Street Hall to hear Boaz’s speech, which was followed by remarks from members of the Independent Party, Tory Party and Party of the Right.

As a libertarian, Boaz argued for the protection of individual freedoms, and he asserted that when the government funds the arts, they are in danger of being limited by specific guidelines.

“The federal leviathan concerns itself with every nook and cranny of our lives, and the arts have not escaped the tender stifling of its embrace,” he said.

Boaz went on to draw parallels between the separation of church and state and the separation of art and state. “America’s founders thought that religion should be left to civil society precisely because it was so important to each individual,” Boaz said.

He contended that, like religion, individuality is essential to the interpretation of art. Therefore, Boaz said, art deserves to be given the same respect as religion and kept entirely separate from government.

Rachel Bayefsky ’09, who spoke on behalf of the Independent Party, agreed with Boaz’s remarks.

“The government’s support [of art] is an imposition of private values,” Bayefsky said. “I don’t think that we should accept the government coming in and telling us what we should care about.”

But Alexander Dominitz ’09 of the Tory Party disputed Boaz’s claims, saying that art is a key element of culture and requires the support of government to survive.

Party of the Right member Helen Rittelmeyer ’08 echoed this sentiment, saying that pulling government funding for the arts would send a message that the arts do not matter.

“By saying that the federal government should eliminate all arts funding, Mr. Boaz has reduced the arts to the cultural equivalent of stamp collecting,” Rittelmeyer said.
Posted by WDNNE at 9:41 PM 3 comments:

At 2 years old, Maica's family found out that she could draw and therefore set the impending doom of painted characters born out of her heart and head. She has had two art shows previously - "Noirs of Life and Death" (1999) and "Bad Day Epiphanies" (2005). She had also designed several posters and album covers for bands from the U.S. and co-founded WBReverly, a designer clothing line in the Philippines . Back home, Maica ran an independent zine called FBC (F***edByCondition), a hodgepodge of ideas on sociopolitical issues, collages, and music.
Maica started with an art scholarship during high school, together with fresh like-minded talents who did not know yet what is to become of their craft. She learnt and absorbed all the traditional styles, and upon graduation, decided to unlearn what was dictated about traditional art. Subculture plays an important role in Maica's style of art; from punk and hardcore music, to fairytales and comic books, taxidermist animals, films and the beautiful carnivalesque perspectives of this reality and of the old, which she dichotomizes in satire and humor. This is what her body of work for this exhibition will be about - the disengaging from the classical ideals of beauty and art, by viewing the world upside down, the way she likes to see hers.
Posted by WDNNE at 11:03 PM 38 comments:

Sha Najak is a multi-tasking artist who delves in poetry, photography and visual arts. She has exhibited her photographs and paintings in Minnesota USA, Malaysia and in Singapore. Sha is also an active member of the community, serving as Founding President of Migrant Voices, a local non-profit arts group that works with migrant workers and the arts. In Migrant Voices, Sha has successfully launched an album of songs performed by migrant workers and a string of events for 2006. Her community work began way back when she first started as a volunteer for local non-profit organizations that work with youths, animals and women.
Currently, Sha is working for a non-profit organization, TWC.

For this exhibition, Sha Najak will explore the visual realm of photography, capturing and amplifying the unheard voices of our society. This series will focus on migrant workers, who have played a crucial role in the development of Singapore.
Posted by WDNNE at 10:53 PM No comments: